Coin Grading is the biggest area of contention in coins. Because the price of a coin is in a great part dependent on its condition, this can be open to many interpretations. Even leaving aside those dealers who deliberately over grade their coins and then advertise them ‘cheaply’, to appear that they are giving you a bargain. The best advice we can give you is, if it appears too cheap, there is a reason for it...

To learn to grade properly takes years of experience and actually handling thousands of coins. You have to know how a coin was made: a hammered coin is vastly different from a milled coin. Learning about the dies, how they were engraved, how long they lasted and what they looked like as they started to wear, is also necessary. You need to know what an Uncirculated example looks like before you can determine if a particular coin is worn, or if it was just struck that way.

And what does Uncirculated mean on coins?

Usually, there is no wear on the highest points but the design may not be fully struck up due to the engraving of the die or its wear. Copper and bronze may or may not have lustre, depending on where and how they were stored.

That’s why it is important to learn how to distinguish original lustre from something which may have been done in order to try and artificially replace that lustre.

Grading correctly is even harder than it sounds. Today a coin's grade is generally determined by five factors, the strike, wear or condition, lustre, colour, and attractiveness. Although attractiveness is a very subjective factor.

In the old days, a coin was either new or it was used. A used coin could be Fine or it could be Extremely Fine, it was just not new.  Today, because of the difference in price between an almost new coin and a new coin, you have to be more careful.

Going from the lowest grade to the highest the coin grading system in the UK is as follows:

Poor (P) – extremely worn and most of the details will be missing but you will still be able to identify the coin as to type.

Fair (FR) – A grade where the coin has seen much wear and it is only just discernible what the coin is. Collectors usually stay away from this grade unless the coin or note is especially rare or expensive.

Good (G) – A grade which denotes a considerable amount of wear. The coin is discernible but the lettering may not be clearly visible.

Very Good (VG) – A grade where the coin has experienced a lot of wear and where the details are still discernible but worn.

Fine (F) – A grade when the coin or note has seen considerable wear but is still very collectable. Many collectors like a used coin because they feel that it has actually been somewhere. Collectors on a budget also like this grade.

Very Fine (VF) – A grade of coin where there has been obvious but relatively restricted wear on the highest portions of the coin.

Extremely Fine (EF) – A grade where there is little actual wear except on the high points. On copper and bronze, original lustre might well still be in evidence. A most appealing and attractive grade, much undervalued by the marketplace in its seeking of the ultimate perfection.

Brilliant Uncirculated (Brilliant Unc) – On copper and bronze coins it means bright and shiny just as they came from the mint. On silver coins, it means with little or no toning, perhaps the middle coins from a roll where the outer coins have toned.

Choice Uncirculated (Choice Unc) – A coin is Uncirculated if it has never been in circulation and is without wear. But due to the vagaries of how coins are struck, how the dies were made and how the coins were treated after striking, there are different grades of Uncirculated. Choice Uncirculated is better than a normal Uncirculated coin with far fewer bag marks and is well struck with full and uninterrupted lustre.

Gem Uncirculated (Gem Unc) – A grade of a coin struck for circulation. We consider this to be the highest grade that a coin can achieve. There must be full and outstanding lustre, an exceptional strike, no nicks and only the smallest bag marks discernible under a strong glass. This quality is harder to achieve in larger sized coins than in smaller sized ones. Fewer than 2% of all Uncirculated coins can be called Gem.

Mint State(MS) – As a grading term, it refers to the highest grading a coin can have. It is also referred to as FDC.

Fleur de Coin (FDC) – A French term which translates as `flower of the die' and means Uncirculated. This term was used far more when coins were either mint or used. Today we use the term to represent a full mint state coin in impeccable condition (perfect Uncirculated of at least choice quality). Used far more on the Continent than in Great Britain today.

Proof – In this country proof is a method of striking and not a condition. A proof coin is struck most carefully with polished dies and a polished flan. It will be struck more than once to get the high relief to show all the fine details. Sometimes you will get a lead piece with half of a coin, this is done to proof the die before striking.

Be careful about grading and until you learn how to grade yourself, deal with someone you can trust.

Coin Grading in the US and in other countries

The grading list in other countries works differently, but these days in the international market place people only use the UK or US system. The main difference between coin grading the UK and in the US, is that in the United States, they use a numerical grading system (Sheldon grading scale), instead of using grading terms e.g. Very Good, Fine, Uncirculated.

In this system there are no less than 10 different grades of Uncirculated. They grade an Uncirculated coin on a numerical basis, anywhere from 60 out 70 to the ultimate which is 70 out of 70. The price difference between 64/70 and 65/70 can be anything up to ten times the price.

We at Britain's Coin Shop, believe there are only three grades of Uncirculated:

As we mentioned before some dealers are a little too generous with how they grade coins, over grading them and then advertising them ‘cheaply’. We are one of the most reputable coin dealers in the UK, and our reputation in the marketplace was partly built by the way we grade coins.

Below are a few examples of how we, at Coincraft – Britain’s Coin Shop, grade Victorian coins in silver (Young Head) and bronze (Old Head): 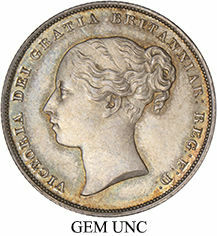 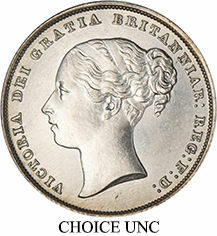 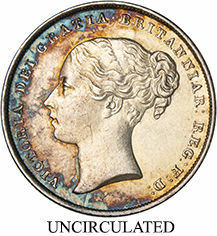 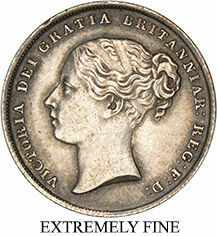 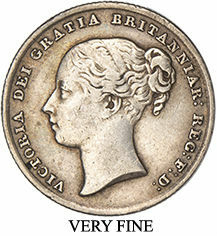 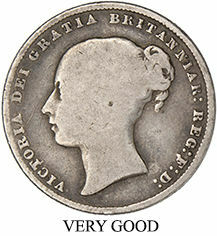 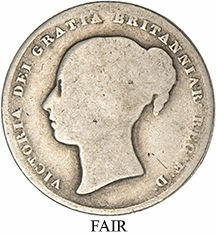 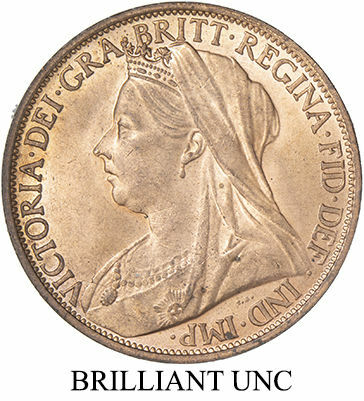 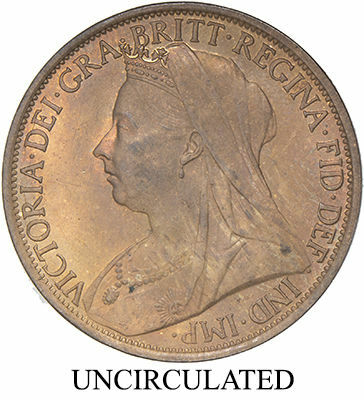 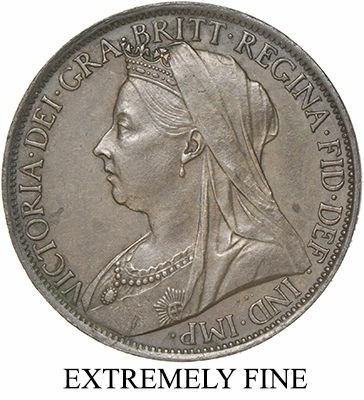 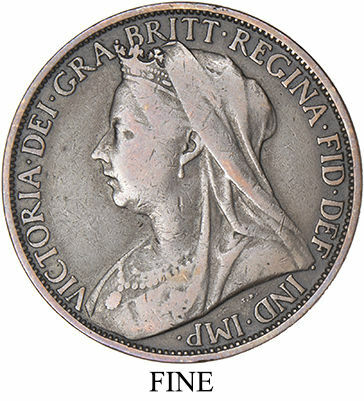 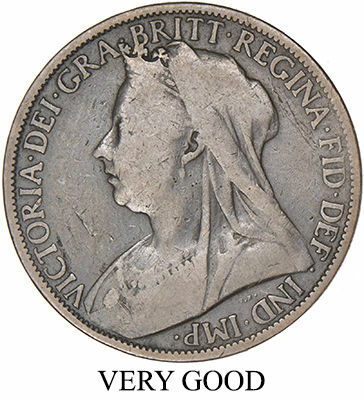 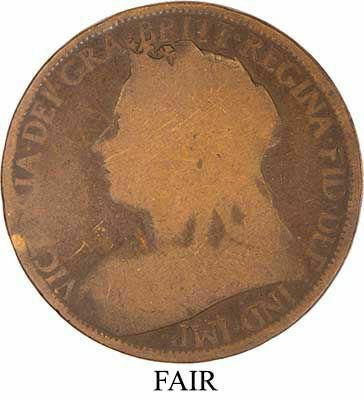 But please be aware that sometimes it is the overall look and feel of a coin, as well as the actual strike and wear that determine its grade.
Especially in the higher grades, it is hard to show this with photographs. Perhaps one day, when we have three-dimensional pictures that you can actually turn over and view from all sides it will be possible.
This article was written to inform newbie collectors about coin grading, we do not perform valuations.If you want to sell your coins, please get in contact with us.
View as
Sort by
Display per page

60 pocket coin albums with padded cover, small enough to fit in your pocket or briefcase. Many collectors like this smaller-sized album to store their collection. You get 10 pages, each of which holds 6 coins. Each opening has a finger hole at the bottom to help push the coin out that you want.
£8.95

For several years we have been offering a Monarch type collection of Pennies. Now we are offering the same type collection but of halfpennies. The Halfpenny is much more difficult to get than the pennies and supplies are limited. You get a halfpenny of Queen Victoria, Edward VII, George V, George VI and Queen Elizabeth II. All are in selected circulated condition and believe us, these sets are not easy to put together. Remember that two of these bronze halfpennies are over 100 years old.
£12.50

Our friends at Lighthouse have designed a glove especially for handling coins. In between the ridges and valleys of your fingerprints there are acids. If these come into contact with the surface of the coins, this can leave your fingerprint indelibly etched into the surface of the coin. The real problem is that it can take years for this ‘fingerprint’ to appear. They have designed lightweight cotton gloves that are easy to wear and still protect your coins from damage due to handling.
£2.95

Precision Illuminated Magnifier: this is a folding loupe that has a built-in light. We find that if you put the coin or banknote between the loupe and the lamp, the light is often cut out. This magnifying glass has a built-in light source so you don’t get any black spaces. It is 10 Power.
£12.95

The third and last design of Victorian coinage was issued when she an elderly woman. The coins became known as the Old Head or Widow Head coins. The old big penny with this design was only issued from 1895-1901. You have the portrait of Victoria facing left wearing a crown and a head scarf. They were issued every year for 1895, 1896, 1897, 1898, 1899, 1900 and 1901. All coins have seen wear after all the newest coin is now 120 years old. Everyone has one or two of them, but a complete date set? Probably not. You get all seven coins, the complete date collection of Queen Victoria Old Head Pennies. But supplies are very limited.
£12.50

One of our competitors is offering a set of World War I Pennies 1914-1918. Yes, their set comes in a smart case, but they are charging £79.50 for the collection... Also, the coins they illustrated were cleaned, they probably think that improves their appearance, but it actually depreciates their worth. Our coins are average circulated just as theirs are, but ours are natural, we have not cleaned them. We do not supply a case, on the other hand, our set is priced at £10.00 and theirs is priced at £79.50. We will not name the other company, we don't want to shame them any more than their price of £79.50 shames them already...
£9.50
Categories
Popular tags
View all